Summary
Thought it would be good to rate the mods below
Biggest one is changing the reference voltage to the shift registers.  That is one of the more complicated changes, but it makes a big difference.

Next was using battery power for the front end, either the amanero or exD card and for isolated 3.3.  For some reason, this made a big improvement.

At least that is my current rating of the main changes I made.  As always YMMV.

Links
tirnahifi dac thread
Most of the mods are from this thread.  Its where I got the ideas for what is presented below.
NOTE on Batteries
For the mods described below, I'm using these batteries
batteryspace 26650 lifepo4 clone
This is a clone of the 26650 lifepo4 cell.  They have worked well for me.
They are easy to use, and easy to charge.  To charge, you just need to provide them with around 3.3VDC, regulated.  I've charged as high as 3.6V, and as low as 2.5V.  2.5 volt is using two in series to generate 5vdc.  I did this in my PC.

For some of the cells, I add a small value, 1W resister, to current limit between the charger and the battery.  I used 1.5 ohm resistors, will describe where later.

These types of batteries can draw a lot of charging current, and you do not want to provide too much current.  But if you keep them charged all the time, or at least close to full charge, this really is not an issue.  I haven't decided yet if it matters if I apply the battery charging voltage when I listen to the DAC.

MODs
Remove output opamps
Removed the 4 output opamps on middle of photo below.  U28, 29, 31 and 32.  As you can see U29 and U32 have thermal pads underneath.  You may have to heat up the body of the parts to remove them.

EDIT:  Need to mention another part to remove, two really, C135 and C143.  In the picture below, they were already removed, the purple wires pass right by them.  They caps are on the output, as part of a high frequency filter, but I think they hurt the sound.  If you think you need high frequency filtering, I would add a high quality, small value film cap from each output to ground.  I didn't find a need to add a cap here. 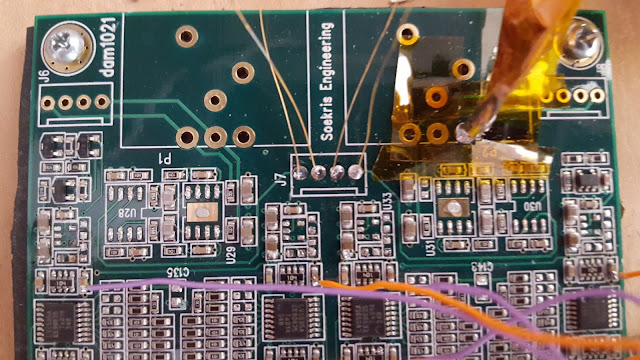 I only use the raw output, so I don't need these opamps.  And these are the only parts that use "PWR A+" and "PWR A-".  This makes modding the power section of the DAC easier, and you can run the DAC from a lower voltage.

I ended up removing a few passives around each op amp and the opamp itself.  You can see this in the picture above.  With the opamp, I heard some distortion that went away when the opamp is removed.

Initially, I wired the + and -3.3VDC to a cap next to the op amp with a small wire.  Wire goes directly to a switch.  Purple/grey wires are -3.3VDC, and orange are +3.3VDC.  You can see this in the pictures below. 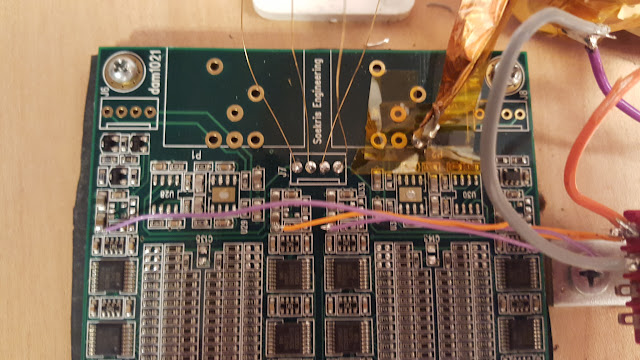 In the picture below, the opamps are still installed.  Compare to the picture above, where they have been removed. 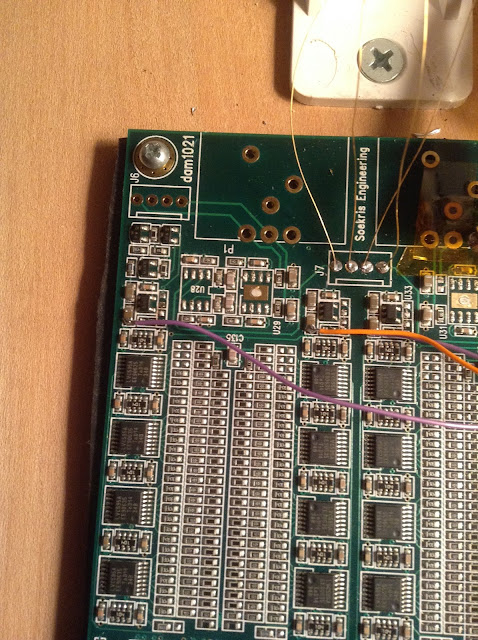 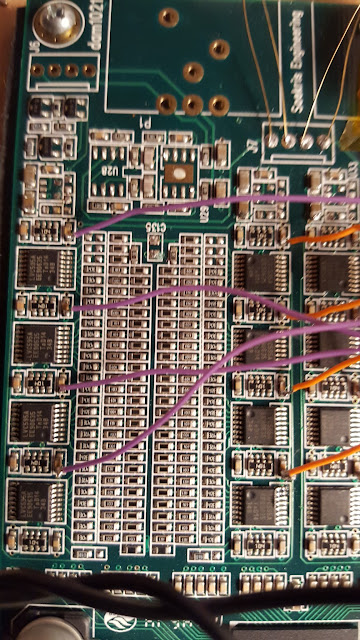 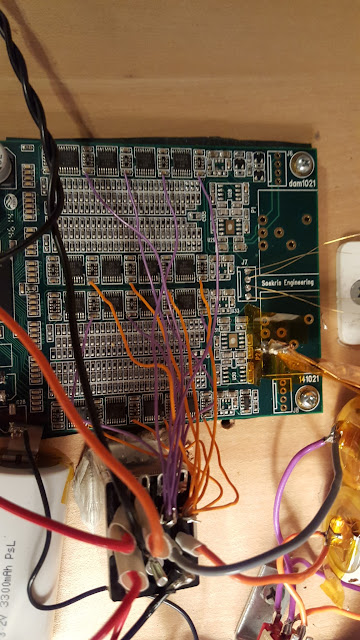 And it does sound better with the 16 wires versus 4, more detail and better instrument separation.

To charge the batteires, I used an old, Twisted Pear dual regulator laying around.  I set both sides for 3.4VDC.  It needs AC, I used two walwarts that supply about 12VAC each to the dual regulator.  Charging power is applied through another switch.

Figure of battery and switch connections. 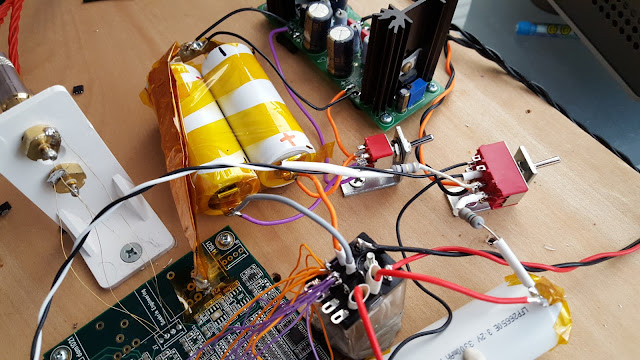 Relays for the power switching
I also decided to use relays to control power to the dac.  Went to my local Frys, and picked up two of these 4 pole relays.
4 pole dt relay 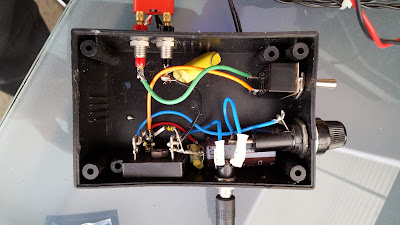 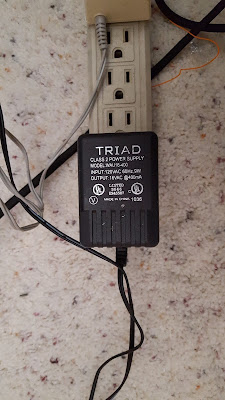 Removing some parts
Once the shift registers have battery power, you don't need some parts.  You don't need anything that generates a negative voltage.  I had already removed the opamps, but I also removed the +/- 5VDC regs, and their output caps.  You can see the removed parts on the right of the picture below.  I also disconnected the walwart I had connected to -V in.
+V in is only used, now it supplies the 3.3V linear reg, and the 1.2V switcher. 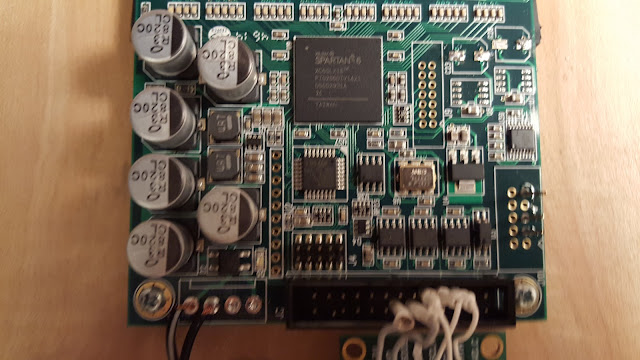 3.3VDC upgrade
The dac comes with a 3.3V linear reg.  This is the 3 pin device with the tab, on the right of the clock chip in the picture above.  I removed it by cutting the three pins, and then heating up the tab until it came loose.

I added another lifepo4 battery, and wired it through the relay.  +3.3 from the battery/relay go to the middle pin of the regulator.  I soldered the - tab from the battery directly to a ground pad on the board, a pad that had been used by a cap I removed. 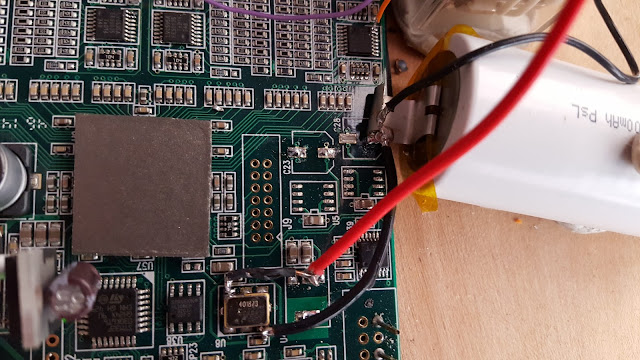 I also added a separate wire to VCC and ground of the clock, you can see in the the picture above.  I also removed a resistor to the above, and to the left of the clock.  This isolates the clock from it's other +3.3V path.  This clock change had a small positive effect, but still recommended because its easy and just takes a couple of wires.

Made another 3.3 VDC regulator to charge this battery, and the one that powers the 1.2V linear reg.
It is a simple reg made from a LM317.  I feed it power from an unregulated walwart. 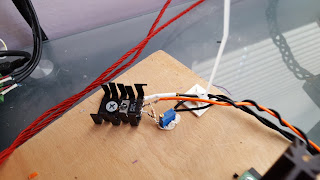 Here is a schematic of my battery charger circuit from the picture above.  The LM317 is set to 3.3VDC output.

R3 and R4 are 1.5ohm, 1W resistors intended to current limit the charging current, and to provide a little isolation between the charger and the battery while the dac is on.

An LT1764 linear regulator generates the 1.2VDC.  This is the minimum voltage that this part can generate.  I used it because I had a few on hand.  As shown in the schematic above, pins 1 and 2, and 4 and 5 are shorted. 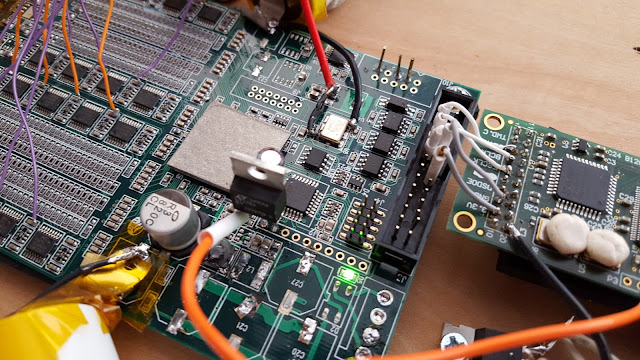 After checking it, I installed it on the board.  With this installed, I would no longer use the 1.2V switcher, and I had already removed the 3.3V linear from the board, so I don't need to provide 12VDC to the A+ input anymore, and I removed the two wires I had connected to J1 to provide that voltage.

Powered it up, and all was good :)

Then I removed the 1.2V switcher, most of the large input caps, and the two inductors by the switcher.  The inductors are difficult to removed, I broke them with pliers (ferrite is brittle) and then removed all the pieces.

It sounded slightly better after going to the 1.2V linear, and a little better after removing the old components.  Not a huge change, I honestly expected more, but still worthwhile to do.

Amanero Power and isolated 3.3V power
Initially, I powered the Amanero and the isolated 3.3V with a simple LM317 reg and a 9V walwart.  Sounded fine, and I didn't think this power was critical since it is isolated from the dac.  I was wrong.

On advice from nige2000, I added another lifepo4 battery here, and it was a major improvement.  More so than the 1.2V regulator mod, and also I think more than the 3.3V mod. 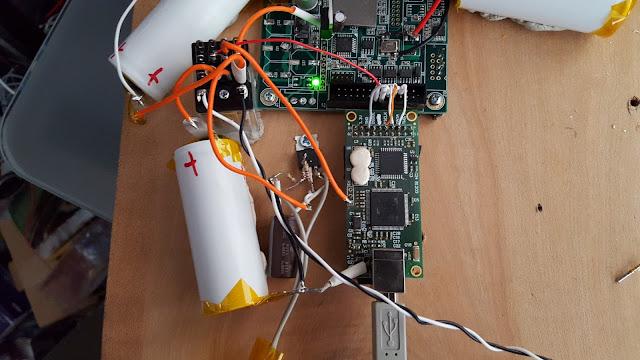 So the ladder batteries are grounded relatively close to the shift registers.  The 3.3V battery is connected to ground by the 3.3V parts, etc.

I'm changing the caps to 100pf panasonic film caps.  Mouser and digikey both carry.
mouser link to caps
I bought a hundred because of the quantity discount it was just a little more than 50.  I would order some extras because they are tiny, and easy to lose a few.

To remove the existing caps, I use two soldering irons. I recently picked up a 2nd iron from hobby king, a Hakko clone that was really cheap there
hobbyking soldering iron

If you heat up each end of a cap with an iron, it just pops out really easily.

I replaced one cap, made sure the DAC still worked, then replaced 4 (first little group), and checked again.
Then I did 5 more, for a total of 9.  That is for one set of shift registers, so 1/4 of the way done, and checked again.  Checking this often slows it down, but gives me piece of mind :)

To install, I add a little dab of solder to one pad, and then tack the cap down to that pad.  Then I solder the other pad with a little more solder.  I use tweezers to hold the cap.  With this method for removal and replacement, it actually goes pretty quickly, easier than I thought it would be.

I replaced those caps, carefully using as little heat as possible.  I checked the signals again, and they were fine.  Then I hooked it up, and static/noise was gone.

These film surface mount caps are very delicate, and you should use as little heat as possible to install them.  You should also check them after you install them.

But, I also heard an improvement in detail, realism and low end presence after making this change, so I still recommend the change, but its a borderline recommendation, because the caps are so delicate and easy to break.


exD USB to I2S card
Got a used exD USB to I2S card to try instead of the Amanero, to see how it would sound.
I had to email exD to get drivers for Windows 2012R2, but he sent me a new driver, and with that I installed it fine.

Changed USB to I2S card.
Bought this one from DIYINHK
Its the

Also wired in a Potato Semi 74G374 octal flip flop between the DIYINHK card and the DAC. 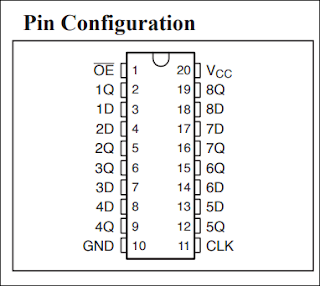 Pretty sure the above is correct, but I can't see the bottom silkscreen on the xmos board since it's wired up, and the xmos signal names are there. 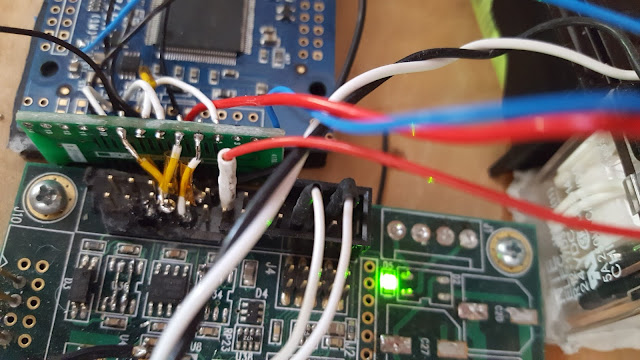 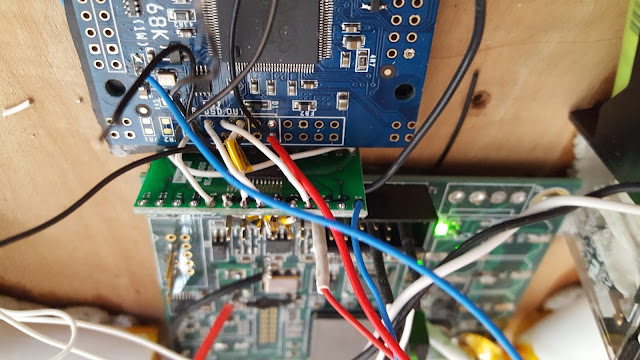 I also removed two isolators, and jumpered across to make the connections, so pic below 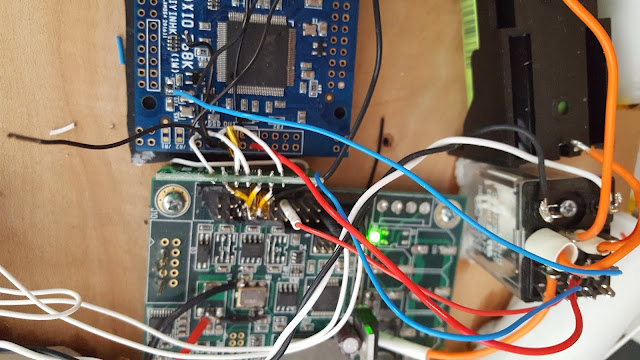 Comments:
Hi,
I have a few questions.
1. For the "FPGA Cap mod", could you show us a photo about how it looks like after replacing the capacitors?
2. For the Amanero USB card, is it needed to remove the 3.3v regulator onboard? As when there is usb cable plugged in, there will be 5V power from the PC side.
Thanks

Hi,
About charging, I am new to the battery thing and I found that it requires some circuit to make current and voltage limiter at different stage of the battery power level, or simply use some IC specific for charging lithium battery. So is is ok in long term if you use a fixed 3.3v for charging? I am thinking to implement this and I aware of the safety of battery in long run as I am thinking to charge it whenever the DAC is off.
Also, if I fix the batteries in parallel and not relocate them when charging, that means the batteries are charging in parallel, is it ok?
Thanks a lot.

Hi Obee
Sorry about the long time to answer, I never remember to look for comments/questions to my blog pages.
1. OK, I can add a picture, but it just looks like a cap, although slightly different from the original.
2. Yes, I did remove the 3.3 regulator for the Amanero, did that a long time ago.

Randy, great stuff...will you try the dam1941 as well ? I got one of those and would love to apply LIpO to ots shift registers....